About 5 years ago I began to ask myself a serious question, "Are the Collies we generally see here in the UK in 2009  the same as the Collies we saw a few years ago, and in particular in and around 1970"?

It is now 40 years since I bought my first Rough Collie, and I decided to take a long hard look at the breed (having owned it since my youthful teen years), and I found myself asking the above question. I first began worrying about such things many years ago in the early 1980's when i noticed that many of my fellow exhibitors were fixated on breeding a certain type of head, I must be rather strange, because I have always placed greater importance on construction, movement, overall balance and that certain look of 'impassive dignity' that for me is the very essence of the Collie. It would appear that perhaps I am in a small minority.

Many of us fell in love with LASSIE  and I am no exception, although Lassie was not my first reason to fall in love with the Rough Collie. However many of us began 'cutting our Collie teeth' by virtue of the film 'Lassie come home' and how can we help but fall in love with this canine star of  the silver screen! Formed in all her natural beauty, intelligent and wistful, almost otherworldly in her understanding and perception, forever dignified and loyal. Did we worry about the finer details of her head and expression...or were these a part of the overall charm?............... 'Lassie' had the long noble head,  the sweet dignity and intelligence of  expression, the alert outlook, the agility and grace...that breeders had planned to produce from the early blueprint they called the BREED STANDARD in the beginning of the 1900's and earlier. The discription still reads.."standing with impassive dignity, with no part out of proportion to the whole"...and this is the first thing we should 'see' when we look at the Collie...a picture of impassive dignity, harmony and perfect balance.

Back we go to the year 2009 and again i ask, "was I seeing this impassive dignity and harmonious construction within the breed here in the UK, or had we begun to lose it just a little bit " ? I looked first within my own kennel and next at the Collies I was seeing in the show ring, I looked with a critical eye, not wanting to hoodwink myself in any way. It is easy and natural for us to want to protect what we have in our own back yard, what we have worked to achieve over the course of many years. I decided the breed in general was losing size and substance. This is not to say that every Rough collie was small and lacking substance, but a loss of size, bone and strength of limb was definitely noticeable. The majority it seemed (myself included) had been oblivious to a gradual process whereby the breed had become  smaller, lighter in frame, and in many instances the head, neck, legs and body had become shorter and deeper, a far cry from the well bunted wedge shaped head with slight (but preceptible) stop. It was becoming increasinlgy difficult to find that heart stopping 'flash of dignity' that was almost taken for granted by breeders pre-1980. I asked myself this and many other questions and decided to do something about it, I imported a handful of American bred Collies, the intention being to integrate then into my own  English bloodlines, and gain back some of what I felt we had lost. I had other reasons too numerous to mention in this small blog. This is entirely my own opinion and I  would add that I do not expect all and sundry to agree with me. I also have to add, that I had previosly worked to maintain Collies in my own kennel that I felt best fitted the breed standard, however, I now felt that without outside intervention (outside the UK), I could no longer acheive this!

2013 saw the rise of a number of exhibitors that have been voicing their opinions against my kennel plans and decisions. I have no idea at all why my own plans should worry other breeders to such an extent they begin making unsolicited snide remarks to friends and others that have chosen to  walk this path with me, Remarks that are rude, uneducated and even downright insulting. A petition was set up by one breeder asking people to sign in favour of a split in the Breed, they hoped for a large amount of  signatures that could be sent to the Kennel Club. Claiming that the Rough Collie we see in America is not a Rough Collie, despite the fact it has been developed entirely from pre-war English imports with a few more recent British imports thrown in to boot!  No other breed has ever been involved in the creation of the 'American collie' and it is genetically proven to be one and the  same breed! What is more, this group of adversaries claim  that Collies such as mine do not fit the UK breed standard and should NOT be rewarded in the show ring. Some freely admit they are judging such Collies by Nationality rather than against the breed standard, and they are using some very bullying tactics in their attempts to gain ground. Please...go to the Kennel Club home page and read the Rough Collie breed standard. (for weights you will need to check the Smooth Collie breed standard, this is basically the same breed seperated only by coat type)

My own view is that I brought 'LASSIE' home to Yorkshire,  but when she arrived it seems that many of my fellow breeders didn't want her here!

So i would like to ask you, the 'MAN IN THE STREET' and anyone else who cares about the breed and its future. Do we want a  return to the Rough Collie (with the size and substance required by the breed standard and commonplace up to 25 years ago). Males measuring 22-24" at the shoulder, but with a long arched neck that gives the appearance of something much bigger. A dog weighing up to 29.5 kg of hard muscle (not fat) Do we want Bitches that measure between 20" and 22" at the shoulder and again with that lovely long arched neck., and weighing up to 25kg. of hard muscle? Do we want that long lean head selected for and loved for 80 years before breeders began selecting for a shorter head with a deeper more well defined stop creating a definite two tier profile?

Do we want an athlletic agile Collie free from 'phobias' ? or do we prefer a couch potato ? does the modern life style no longer require a dog whose attitude to life is full  of fun and laughter, who is so strong of limb he is difficult to injure, whose level  of fitness elevates him to that of a true Shepherd?

Do we believe that breeders are justified in saying that the collies portrayed on the pages of my website...are not fitting a breed standard that was originally written in the late 1980''s to  produce dogs  that looked like those below, born circa 1950-60! 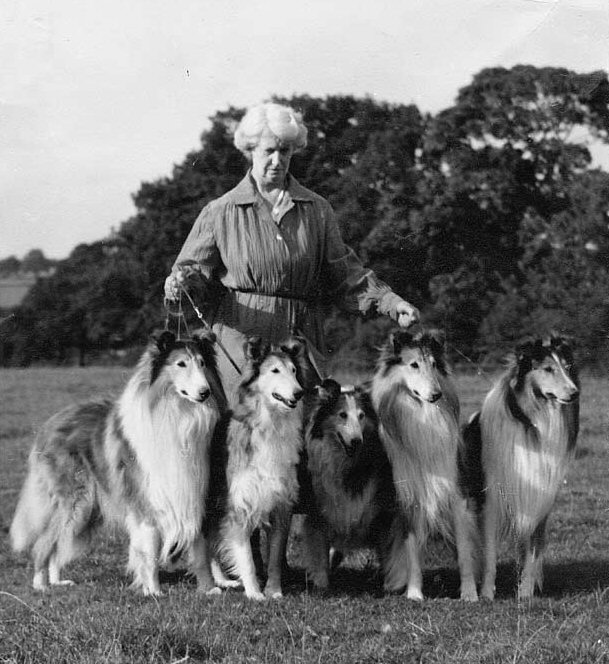